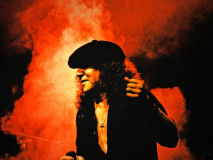 Front man Wade Salter has taken on the formidable task of belting out the piercing vocals of Brian Johnson as well as capturing the unmistakable charisma and swagger of the legendary Bon Scott. Salter takes the stage by storm each and every time Dirty Deeds performs, and as a result of his tireless dedication to honouring both Johnson and Scott, onlookers may enjoy an accurate, powerful and first class AC/DC experience. 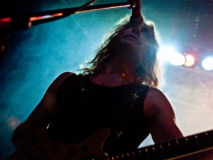 The Malcolm to Ninj's Angus, Scott Henderson has a significant grasp of the branded custom style rhythm that is AC/DC. The driving and unfaltering rhythmic force that defines AC/DC's blazing sound is purely evident in Henderson's chop-style guitar playing. Inspired by a deep seated respect for the infamous Young brothers', Henderson is an integral element of Dirty Deeds.

Despite being only 5' 2", Angus Young's shoes are practically impossible to fill but Ninj Wilson has come as close to it as anyone. Ninj's fierce riff's and lightning fast solos are meticulously fashioned after Youngs' own and he has genuinely reached a style of playing that can only be described as authentically AC/DC.

As well as donning the schoolboy uniform and the signature Gibson SG guitar, Ninj has masterfully captured the gestures and movements of Angus' live performance and stirs up the audience with a captivating exhibition.

Drummer Glenn Beck is a seasoned musician with an abundance of talent and dedication. He has a hard hitting, classic style that has become a cornerstone of Dirty Deeds sound. Glenn's raw energy and unfaltering tempo accents the rhythm perfectly and he has a natural ability to adjust, complimenting the music instinctively. Deeds is proud to have Glenn on board.

Deeds are very excited to have as the newest member of the team, bass player Mr. Al Bezanson. The band feel incredibly lucky and privileged to welcome him in helping to represent one of the most intensely driving rhythm forces in rock history. Al's talent is exceptional and he immediately and enthusiastically stepped up to the challenge

"I have had the pleasure of seeing AC/DC live in concert and I couldn't help but think, I've seen this show before... Dirty Deeds is the real deal, they are the ultimate tribute to one of the greatest rocks bands of all time."
Ann MacGregor